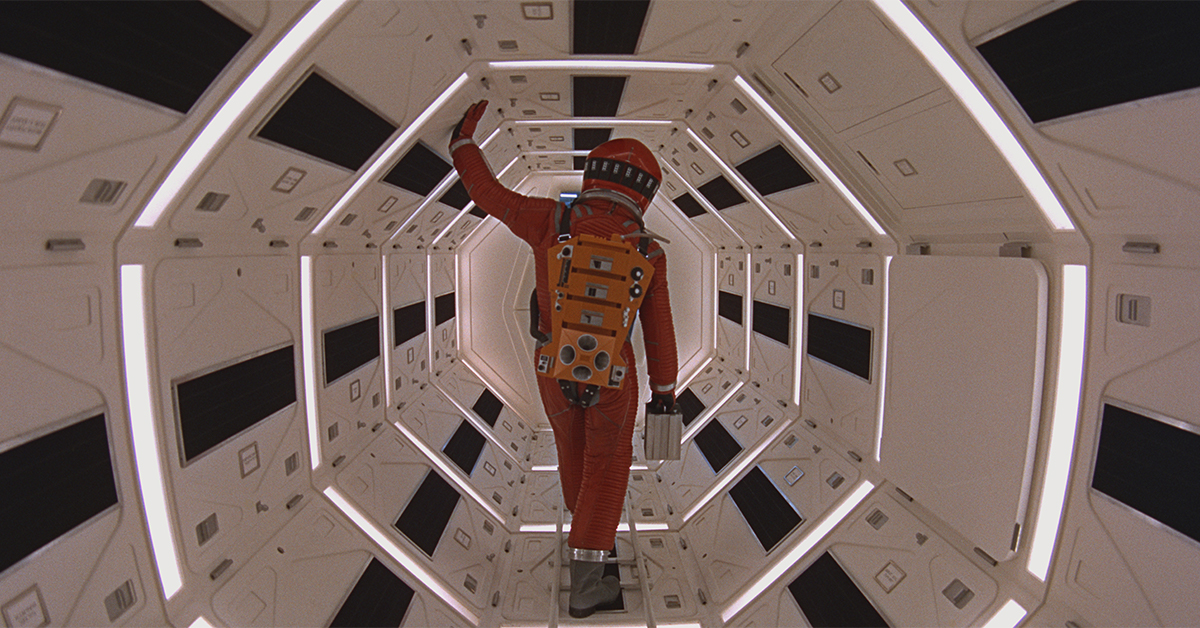 Heeere’s Kubrick! A Tribute to a Cinematic Genius

Stanley Kubrick was one of the most innovative directors of all time, who pushed the boundaries of film through his dynamic storytelling, and use of visuals elements, including color, lighting and framing. To honor this cinematic genius, we’re holding our second annual Heeere’s Kubrick film series. This curated series celebrates Kubrick’s innovative story-telling through four Kubrick films playing Wednesday in April. To continue the celebration, we dove into some of the visual innovations featured in these cinematic masterpieces:

Check out this series every Wednesday in April, and celebrate the innovation of Kubrick!

Innovation # 1: An Explosion of Color:

Whenever you watch a Kubrick film, you are bombarded with vibrant color. Whether it’s the bright red HAL’s eye in 2001: A SPACE ODYSSEY, or the electric blue light of the Sonata Jazz Club in EYES WIDE SHUT, Kubrick places color precisely on screen in order to propel the story visually. In 2001: A SPACE ODYSSEY, color is placed in contrast to the colorless, lifeless spacecraft, creating an explosion of passion, life and humanity, against a desolate, stark, mechanical background. In EYES WIDE SHUT, Kubrick contrasts shots of bright, lustrous red with shots of cool, smooth blue. This contrast is so prevalent, viewers have developed a theory, speculating that red symbolizes sex while blue symbolizes money, two tropes throughout the adventure.

Regardless of the exact meaning behind this color, Kubrick’s specific use of color transports us into the world by creating a vibrant mood that propels his films visually. See if you can resist getting pulled into his world, through this compilation of Kubrick’s use of color:

The Hollywood standard for lighting is based off of a three-point lighting system, where scenes are lit with three off-stage lights: one key light in front, one fill on the side and one back-light in the back. This technique reduces shadows and allows the subject of each shot to pop from the background. Although this lighting gives us a clean standard, it is not very realistic.

Kubrick broke from this standard and added practical lights within his frames. Instead of clean perfectly lit actors, Kubrick’s shots include dark shadows contrasted with bright light. In 1975, Kubrick pushed his lighting to a new level by lighting Barry Lyndon entirely by candles and natural light. This hyper-realistic lighting creates a shadowy, almost suffocating world that traps protagonist Raymond Barry, while also paying homage to the gorgeous 18th Century paintings that inspired each shot.

Another tool Kubrick played with was framing. From his wide shots of the countryside in BARRY LYNDON, to the close up shots of the Lolita’s toenails being painted, Kubrick framed each shot with precision to create a specific narrative and point of view that propelled the story. This can be seen in his adaptation of the controversial novel, LOLITA. Using medias res, Kubrick starts the story at the end and makes the predator Humbert our third-person narrator who guides us through his story. As Humbert explains his actions, Kubrick’s swift camera work and specific framing glides from one object to the other carefully capturing certain moments, and cutting past others.

Celebrate the innovation of film, and don’t miss these cinematic Kubrick masterpieces on screen every Wednesday in April at Kahala Theatres!