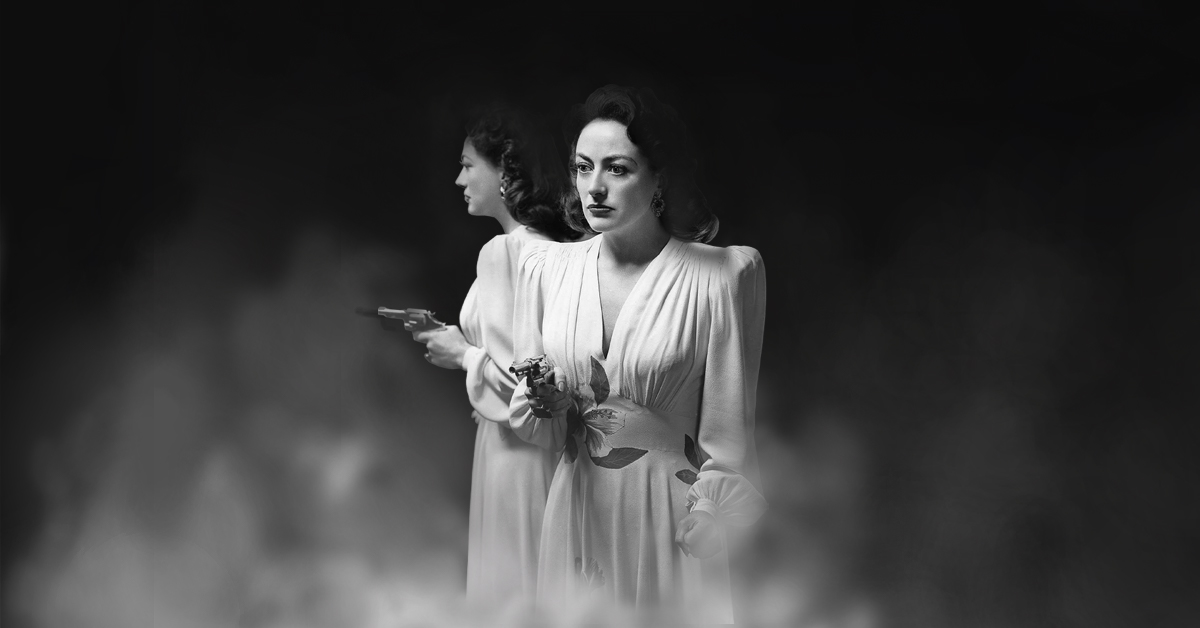 Celebrate the iconic stars of Film Noir with our new series this May! This 1940s genre, featuring high-contrast cinematography, mysterious murders and lots of smoke, pushed the boundaries of film and storytelling. In addition, this ground-breaking genre introduced a new type of female character: The Femme Fatale. This mysterious enchantress seduces the male hero into never suspecting she was involved in the crime, while secretly pushing her own ambitious agenda for power.

Although the femme fatale is still limiting, and is now seen as a bit of a cliché, this character type was shocking to post-war audiences because it showed strong, smart females fighting for something other than love and marriage. This innovative character type became the predecessor of the modern leading lady, and paved the way for new types of roles for women on screen.

The Origin of the Femme Fatale: Mary Astor in THE MALTESE FALCON and Barbara Stanwyck in DOUBLE INDEMNITY

Mary Astor portrays an early version of the Femme Fatale in 1941 through her role of Miss Wonderly, also known as Brigid O’Shaughnessy in THE MALTESE FALCON. Introduced as a timid damsel in distress, Miss Wonderly encapsulates Humphrey Bogart’s interest, which pulls him into her web of lies. Creating the iconic female silhouette in the frosted glass trope, Mary Astor creates the quintessential femme fatale, dressed in 1940s high-fashion, appearing breathless and helpless in every scene and oozing with sex-appeal, which is tantalized further when she enters wearing only her robe, a shocking, provocative outfit at the time. Miss Wonderly is not only beautiful; she is smart and ambitious, which allows her to challenge the masculinity of the men around her, and become the ultimate antagonist in this film noir classic.

Barbara Stanwyck continued this character archetype in 1944 through her cunning portrayal of the most iconic femme fatales of all time: Phyllis Dietrichson in DOUBLE INDEMNITY. A seemingly devoted wife, Phyllis Dietrichson has a not-so-secret agenda, matched with the grit to convince salesman Walter Neff (Fred MacMurray) into making a malicious deal. Double Indemnity pushes the femme fatale archetype further through a more open display of power and seduction. Instead of a bathrobe, Stanwyck enters in her bath towel and slippers, further allowing MacMurray (and audiences) to fall under her spell.  As the highest paying actress in Hollywood at the time, Stanwyck was hesitant about taking on this immoral role. However, this glamorous star took on the challenge, and unraveled into a seductress who switches between a warm and alluring enchantress to an icy, conniving viper, entangling the hero salesman and creating one of the most popular renditions of the femme fatale.

Pushing Further: Joan Crawford in MILDRED PIERCE, Rita Hayworth in THE LADY FROM SHANGHAI and Peggy Cummings in GUN CRAZY

As the Femme Fatale grew in popularity, the archetype began to become too predictable for this genre of mystery and plot twists. Film makers began exploring other paths for their female leads. This is especially present in the 1945 film noir classic, MILDRED PIERCE.  Joan Crawford portrays the cunningly ambitious mother who will do anything for her daughter, including eliminating cheating husbands snaring men into murderous situations, and scrounging for money through any means. This portrayal seems to paint Mildred Piece as the stereotypical femme fatale, begging for an ending where Mildred reveals her malicious intentions before being dragged off to jail. However, MILDRED PIERCE takes a turn, creating a new female archetype: The Femme Modern.

Unlike the Femme Fatale, whose archetype centers around women seeking power through sex appeal, the Femme Modern is often portrayed as a hard-working strong female with good intentions that she achieves through more masculine means rather than sex-appeal, an archetype that was very relevant in World War II when women entered the workforce.  While MILDRED PIERCE defines a new archetype, it still stays true to the Film Noir genre, involving an unexpected femme fatale twist, making it a film noir masterpiece.

Orson Welles pushed Film Noir in a different direction through his dramatic 1947 film, THE LADY FROM SHANGHAI. Starring Rita Hayworth in the Femme Fatale role of Elsa Bannister, Orson Welles follows the femme fatale archetype, while giving his then wife a more realistic motive. Instead of seeking power and money through sex, Hayworth explores Elsa’s need for justice and brokenness from her abusive past. Unlike the classic femme fatale, Hayworth does not create a guise of fragility and morality, but is openly cold and impassive throughout the entire movie. Her unraveling does not come from the male sleuth’s discovery of her scheme, but from her own self-discovery of how her need for retribution has changed her.

The Femme Fatale archetype continued to evolve in films throughout the 1940s and 50s, including in the 1950’s film, GUN CRAZY. Peggy Cummings portrays a less conventional femme fatale, Annie, a pants-wearing, dead shot searching for a companion for a Bonnie and Clyde-like adventure. The film follows the femme fatale archetype, showing the growing deadly attraction between Annie and the newly reformed Bard (Russ Tamblyn) while pushing the boundaries of gender at the time through Annie’s traditionally masculine attributes.

Celebrate these ground breaking femme fatale characters in the exciting cinematic genre of film noir! Watch the progression of the femme fatale and the foundation of fearless female roles in films throughout all these films in our special curated series playing every Wednesday in May at Kahala Theatres.