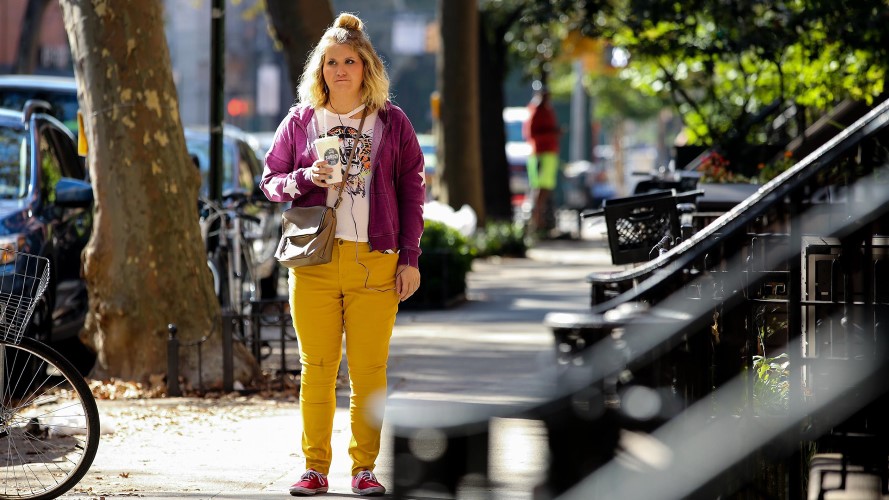 From sidekick to “a slam dunk” – BRITTANY RUNS A MARATHON

Will the real Brittany please stand up?

BRITTANY RUNS A MARATHON has audiences running to theaters, and is being heralded by Variety as “a slam dunk.”

Director Paul Down Colaizzo brought his real life friend and roommate Brittany’s real life story to the big screen in his newest film. Colaizzo stopped by the Angelika New York with the film’s star Jillian Bell to discuss the film, with the real Brittany in the audience watching!

Bell’s performance certainly lived up to the critics’ expectations. Rolling Stone raves, “Jillian Bell is a comic force of nature with real dramatic chops in this hilarious and heartfelt tale.”

Brittany is not the typical character who graces the big screen as the lead. Colaizzo states that his goal was to “take this icon of an American comedy.. hot mess, fat best friend, sidekick party girl that we’ve been taught to laugh at, and and deepen her, and go on a hero’s journey with her.” The humor in the film was built to be relatable, so that audiences can ‘be’ Brittany, rather than looking at her from the outside.

Time Out agrees, stating “Colaizzo successfully walks a fine line between inspiration and caution, never presenting Brittany as a patronizing role model for weight loss, nor a clichéd case of inner beauty.”

Award-winning playwright Paul Downs Colaizzo makes his directorial debut with Sundance Film Festival Audience Award winner BRITTANY RUNS A MARATHON. This uproarious, irreverent and surprisingly emotional comedy inspired by real events is being heralded by Variety as “a slam dunk.” Brittany Forgler is everybody’s best friend ― except maybe her own. At 27, her hard-partying ways, chronic underemployment and toxic relationships are catching up with her, but when she stops by a new doctor’s office to try to score some Adderall, she gets slapped with a prescription she never wanted: Get healthy. Too broke for a gym and too proud to ask for help, Brit is at a loss, until her seemingly together neighbor Catherine pushes her to lace up her Converse sneakers and run one sweaty block. The next day, she runs two. And soon, after finishing her first mile, she sets an almost unthinkable goal: running in the New York City Marathon.