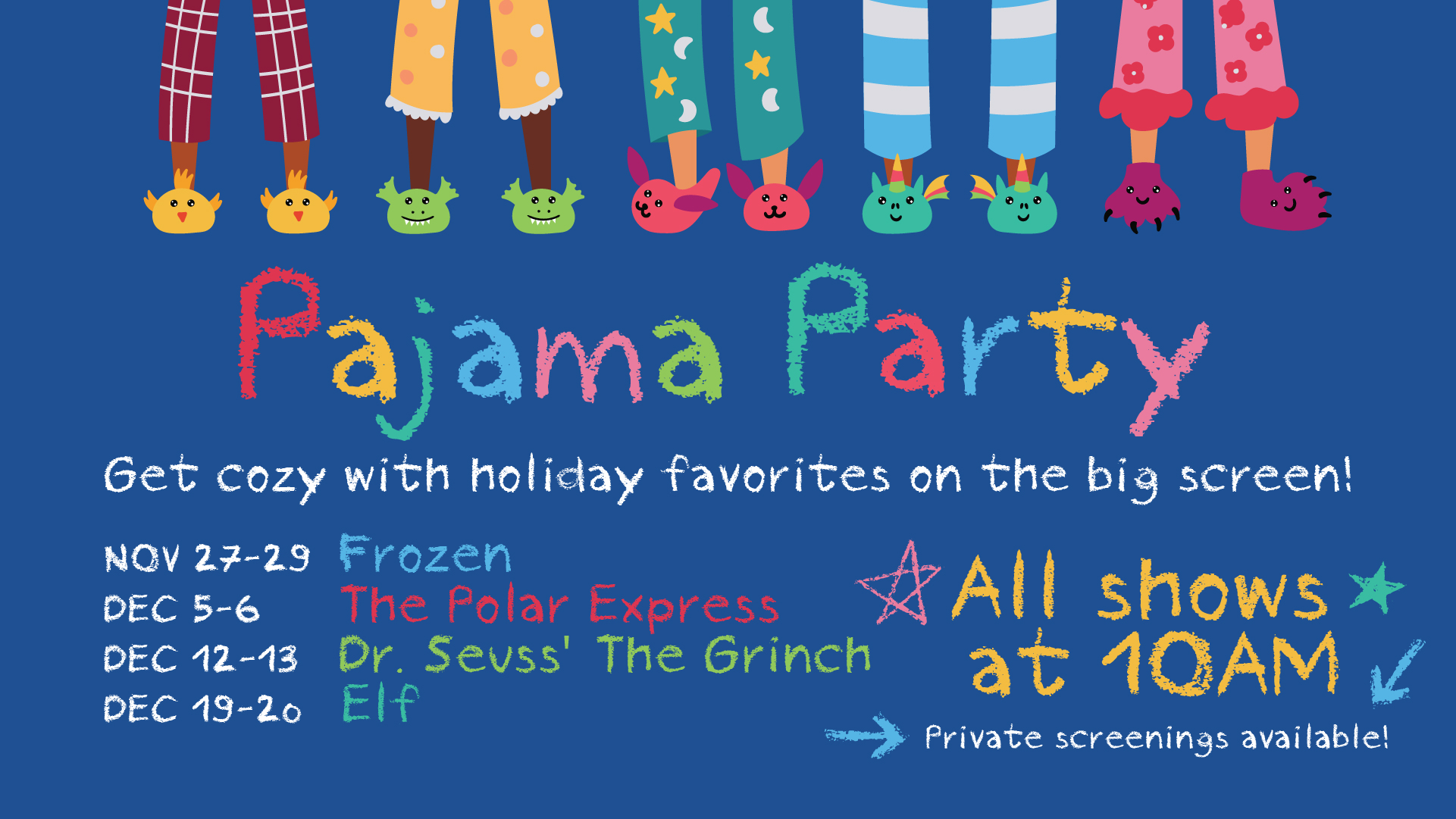 Grab the family and get cozy with holiday favorites on the big screen in our Pajama Party Series!

When their kingdom becomes trapped in perpetual winter, fearless Anna (Kristen Bell) joins forces with mountaineer Kristoff (Jonathan Groff) and his reindeer sidekick to find Anna’s sister, Snow Queen Elsa (Idina Menzel), and break her icy spell. Although their epic journey leads them to encounters with mystical trolls, a comedic snowman (Josh Gad), harsh conditions, and magic at every turn, Anna and Kristoff bravely push onward in a race to save their kingdom from winter’s cold grip.

Academy Award winner Tom Hanks and director Robert Zemeckis (FORREST GUMP, CASTAWAY) reunite for THE POLAR EXPRESS, an inspiring adventure based on the beloved children’s book by Chris Van Allsburg. When a doubting young boy takes an extraordinary train ride to the North Pole, he embarks on a journey of self-discovery that shows him that the wonder of life never fades for those who believe.

Funny, heartwarming and visually stunning, THE GRINCH is a universal story about the spirit of Christmas and the indomitable power of optimism. Academy Award® nominee Benedict Cumberbatch lends his voice to the infamous Grinch, who lives a solitary life, and only sees his neighbors in Who-ville when he runs out of food. When the Whos declare they are going to make Christmas three times bigger this year, the Grinch realizes there is only one way for him to gain some peace and quiet: he must steal Christmas. Meanwhile, Cindy-Lou Who plots with her gang of friends to trap Santa Claus. As Christmas approaches, however, her good-natured scheme threatens to collide with the Grinch’s more nefarious one.

For his sophomore stab at directing, actor/writer/director Jon Favreau (IRON MAN), took on this holiday comedy starring Saturday Night Live-alum Will Ferrell. Ferrell stars as Buddy, a regular-sized man who was raised as an elf by Santa Claus (Edward Asner). When the news is finally broken to Buddy that he’s not a real elf, he decides to head back to his place of birth, New York City, in search of his biological family. Elf also stars James Caan, Mary Steenburgen, Zooey Deschanel, and Bob Newhart. Don’t miss this cheerful movie as the perfect start to the holiday season!

Grab tickets and re-live these delightful holiday favorites on the big screen!

Want to make your Pajama Party experience VIP? We’re offering private screenings of all titles! For pricing, availability, or to book your private screening, email us: VIPScreening.HI@ReadingRDI.com

Get tickets for Pajama Party Now!